A great hike on Thorsborne Trail 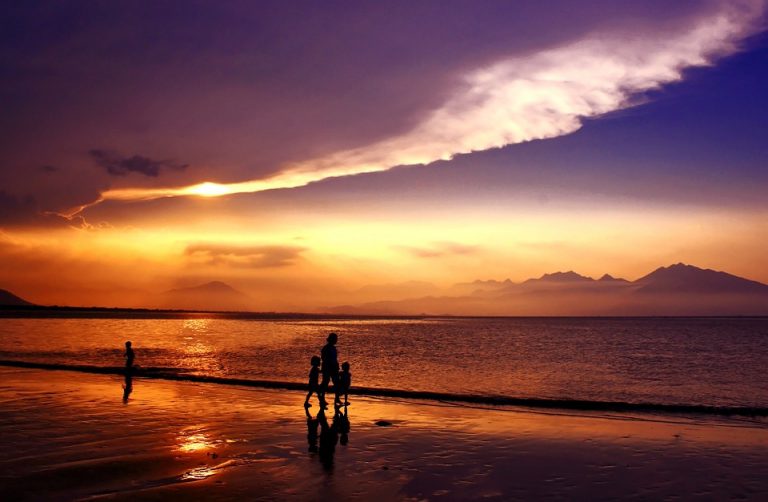 I had heard a lot about Hinchinbrook Island and the Thorsborne Trail from my friends.  Being from New York City, I had no clue what I was about to encounter.  I had no idea about where to start, where to go.  But after reading blogs and other sources, I was sure about one thing: the small north Queensland, Australian town of Lucinda is the best jumping-off point to reach Hinchinbrook Island.  I called up John, who was kind enough to guide me through the final and most important leg my journey.  He shared his knowledge of the island and what I should expect.

So with his encouraging backing, I set out for Townsville, Australia.  After a 22 hour flight, finally reached my first destination, Brisbane. Then after a connecting flight to Townsville and right from the airport I was able to catch my pre-booked ride to Lucinda, arriving around noon.

Lucinda – Lucinda is at the southern entrance of the Hinchinbrook channel.  I was mesmerised by the view of this coastal town. The main attraction of this place is Lucinda jetty, known as the longest sugar jetty in the Southern Hemisphere.

It was the middle of August and as usual the weather was a delight.  I had a reservation at Lucinda Point Hotel Motel, which was just a 10 min walk from the port.  The stay at this hotel was an affordable one as it included cheap lunches, and dinner apart from the cost of the room.

The swimming pool with excellent outside area completed the picture.  I had read a lot of positive feedback about the food.  So after a swim I decided to try some pizza. Well, the taste and texture really took my heart, and pizza is a staple in New York so my standard is high!  It was an unforgettable night at the little pub with live music.

Destination Thorsborne Trail through the Hinchinbrook Channel- Next morning, I finally met John in person, an amazing guide-cum-new-friend. John’s depth of knowledge and willingness to share information was really impressive.  When I arrived at Dungeness, I met a hiking group.  They were also coming on the ferry.  Anyway we started at 8 a.m northward up the passage towards the Thorsborne Trail. I felt like I was dreaming at that time. There was nothing in my mind but the enjoyment of the trip up the passage, as if I had left the whole world behind.  My attention was taken by first one great view after another, interspersed with wildlife that John pointed out along the way.

The trail has two points of entry or departure. Ramsey Bay boardwalk is at the northern end of the island and George point is at the southern end close to Dungeness on the mainland. You can either walk north to south or south to north or only part of the trail and return to the place you began.

I was transferred to Ramsay bay through the majestic Hinchinbrook Channel, one of the ideal place for fishing. It was an amazing visual treat full of cloud covered mountain with the rainforest, while passing the channel.

Ramsay Bay- It took 1hr 45min to reach at Ramsay Bay and I started my boardwalk from this point. It’s just a great beach for fishing and an untouched tropical area on the east coast with a rocky headline, surrounded by  mangroves. It’s a combination of all the natural parts, from cloud covered mountain to the ocean panorama and wildlife along the way.

I was carrying plenty of drinking water and a light-weighted bag as the weather wasn’t too cold. The most important thing is hiking shoes as most of the places are rough, so you need to take good protection of your feet. My hiking experience became quite tough as I got some allergic reaction in my skin due to massive existence of sand flies. So it’s better to carry some anti-allergy medicines. Moreover my suggestion is to cover yourself fully by the full sleeve shirt and pant.

Zoe Falls, Zoe Bay- Anyway next decided to move towards the Zoe Bay, an amazing swimming holes with spectacular views and humpback whales. Getting such awesome view of Mt Bowen (Island’s largest mountain) was a great pleasure for eyes.The available fishing, snorkeling, swimming and scuba diving facilities of this bay, were quite impressive.

After walking near about 1km from the beach finally reached at the freshwater pool at the base of Zoe falls and really had a safe swimming after a day of sweating in nature’s arm.

Mulligan Falls- It was my 4th hiking day. I started my walk early in the morning as I had to return into the Mulligan falls campaigning area very early afternoon.The campsite was quite impressive with the plenty to see and do around.

George Point – Last day and finally reached at the north end, George Point. This point is just the combination of rainforest & the sweeping bays and located within Hinchinbrook National Park. Being a nature lover and wildlife photographer, it was an great opportunity to enjoy the unspoilt nature specially with someone like John who have a great idea about the exact location, where the dugong, dolphins and variety of birds can be found throughout the day.
Though the hiking was difficult, still It reminds me about the bay with sparkling waterfalls,the Mount Bowen towering over it during a setting sun, moreover the reckless walk with the proper guidance.

I have share mine, now it’s your time to make an unforgettable memory with Hinchinbrook Island ?